I ain’t tryin to preach, I believe I can reach
But your mind ain’t prepared
I guess I’ll see you when you see me

Avoiding something solely based on its being popular is a lifetime habit I think I have finally broken. I now approach pop culture like I do culinary: at least one bite.

When the film The Matrix became an instant huge hit, I stubbornly refused to see it – and I remained steadfast in my refusal for twelve years. After I finally saw the film, it instantly took a spot in my Top Five of Personal Most Influential Movies.

For those who haven’t seen The Matrix, the premise is simply this: Most of us humans believe we are a small part of a universal truth, when in actuality, we are an even smaller part of a grand designed delusion.

Comfortably seated in a bean bag with a tiny swamp cooler doing its best to fight off Tucson, Arizona heat, I stumbled upon what would revolutionize how I saw the world and religiosity. At the same time, it brought into sharp focus the conceit of the The Matrix.

Another meme that so successfully distills a complexity: 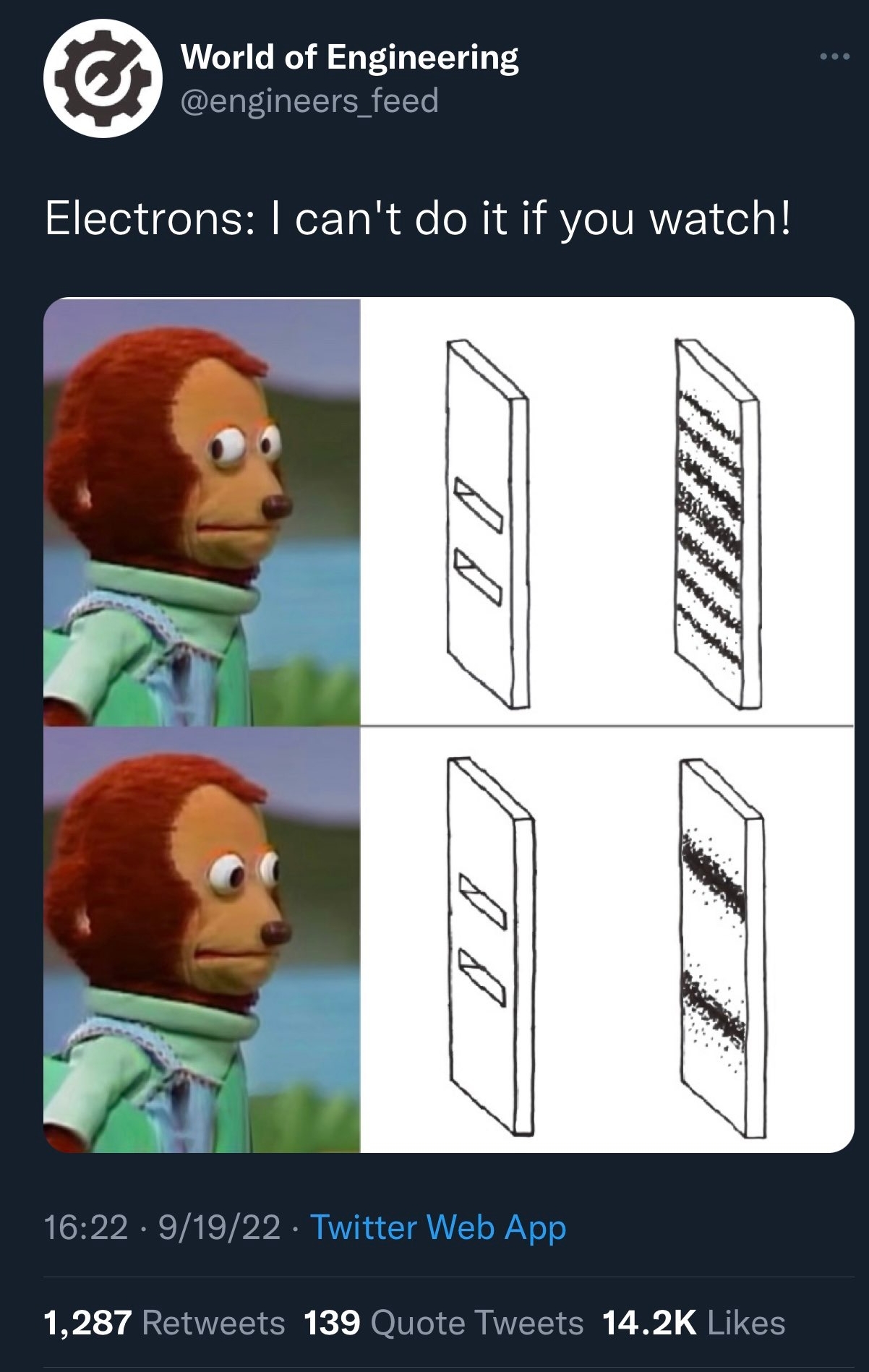 There is an experiment with profound results – one that less than 1 percent of the world has even heard of. The experiment is this: Shoot one electron at a time at the first structure over and over again. Then see where it lands on the second structure. That’s it. Common sense suggests that the results shouldn’t change because there isn’t any outside interference.

As this experiment is being conducted, if a human looks at it, the outcome is as shown in the above meme’s bottom panel. If the human doesn’t look, the outcome changes to the top panel. Look or not look, no other factors change the outcome.

Re-run the experiment, but this time replace the human with a recording device (camera or any other measuring device.) And the experiment will have the same outcome as with the human.

Time to outsmart whatever is going on. Set up the experiment again, but this time change just one thing: Disable (i.e., turn off) the camera, but point it at the experiment.

The outcome should be the same as when the camera was turned on, right? Wrong!

Keep in mind from last week’s post that I have an allergy to woo-woo. Upon first hearing of this experiment, it’s hard to believe this is, in fact, hard-core science.

The first version of the experiment was performed 220 years ago in 1802, but it wasn’t until 1974 when it found its current form. In 2002, the most rigorous version was achieved. The experiment has been performed around the world by many thousands of scientists and science lovers, and some claim they have a DIY version.

There is no dispute that the experiment has the same result each and every time.

As for how it happens, there is broad consensus to the broad strokes and much quibbling over the finer points.

The why, as in what are the underpinnings, is hotly disputed. Many a young physicist dreams of being the one whose explanation is proven by experiment.

Ever so predictably, this temporary gap in scientific understanding attracts the merchants of woo. I very much want the gap collapsed in my lifetime. I am not sure for which reason I most want the gap closed … the fundamentally different understanding of our existence or the hushing of woo-woo.

This experiment and the story of The Matrix have nothing to do with each other. But what they share in common is a fine example of the heights that great art and great scientific inquiry can achieve in opening our minds to truths right in front of us to which we are blind.

This week’s photograph of someone having placed a shattered communication device – a feat that would not be possible without the achievements of the aforementioned niche of science – at the rim of a trash can. Placed in the hope that someone would find a second use for the phone? Or just couldn’t bring themselves to push their attachment over the edge into the collection of the disregarded?

And now, know the photograph.

Video
Send the love. Send the criticism. Send the suggestions for improvement. Your thoughts are welcome!

PDF version. Best for printing.
Download PDF
Get your copy.

Sharing om your social media is both encouraged and appreciated.
Made-to-order, high quality prints available of this photo.

Legalese for those who want to strip away the branding and try to make money with the photo.

If you strip away the branding, it will show intent,  and use it for commercial purposes, I will enforce my rights.

If you strip away the branding then share it on the internet for, please don't. The branding is what keeps the free photos, free.

List all the other newsletters.
Newsletters
Let's Do This